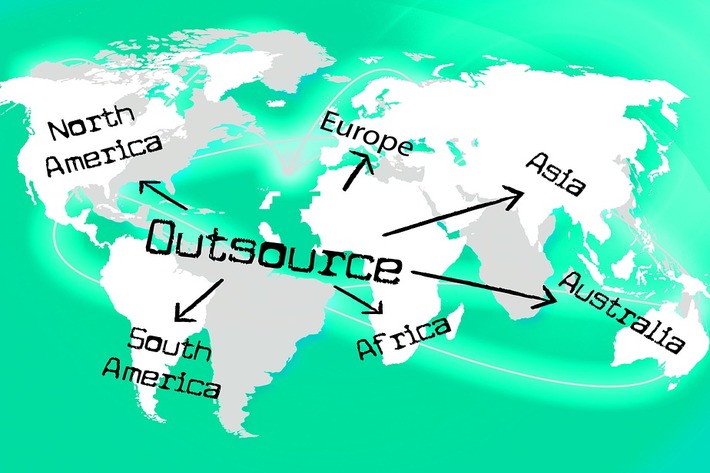 In today’s world, when you want to find a reliable and affordable employee, you don’t have to limit yourself to the city, country, or even part of the world you currently live in. Remote work is all the rage nowadays, which is why more and more companies opt for outsourcing.

Here’s the thing - not only does this business model reduce overall costs - it also gives you access to a global talent pool that would otherwise be beyond your reach. We’ve gathered the most mind-blowing outsourcing statistics to help you understand just how popular this hiring method is and what some of its biggest benefits are.

It might not come as a surprise that the US is the single biggest outsourcing country in the world. Although some opponents of outsourcing believe this trend is costing Americans their jobs, the fact remains that the global market relies on it.

Here’s why - India, China, and numerous other countries around the globe offer high-quality work at affordable prices. In the future, we can expect to see Eastern European countries to join the race, which will further improve the quality of the work provided.

The Government and Defense sectors are the two biggest users of outsourcing in the Americas.

Two of the most influential countries in the world, the US and Canada, utilize outsourcing for their Government and Defense needs. These two sectors contribute 81% to outsourcing contract value. In Europe, the Middle East, and Africa (EMA), the main areas of contribution are Government, Banking, and Telecom, while in the ASPAC (Asia-Pacific), it’s just Telecom.

Because of the Great Recession, call center workers in the US earn on average only 14% more than outsourced workers in India.

Job outsourcing statistics tell us India and the Philippines have been the go-to choices for US call center agencies for years now, thanks to the affordable English-speaking workforce. However, the fact that the difference between salaries isn’t that big nowadays may affect US jobs lost to outsourcing and help reduce unemployment in the country.

While India is the biggest outsourcing provider in the world, the US is certainly the biggest contractor with a whopping 84.2% of the whole market, according to US outsourcing stats. The best way to highlight the importance of the US is to take a look at the second biggest contributor, the UK, which makes a rather unimpressive 5.2% contribution.

After the Great Recession, only 9% of businesses decided to stop their outsourcing efforts.

On the other hand, more than half of companies (57%) actually decided to increase their use of outsourcing. These United States outsourcing statistics show the remaining 34% of these companies simply restructured their existing agreements but kept on relying on them. Hence, 91% of companies in total still continued to use this business model after the recession. Indeed, offshoring (which is yet another popular term for it) is a rather cost-effective model, so it’s suitable in times of crisis.

If we take a look at the provided chart, we can see this is a step down from the year before, when the market was worth $3.3 billion more. There was a steady climb between 2000 and 2012, following which the values have fluctuated a bit more dramatically. The highest value was in 2014, reaching the amazing $104.6 billion.

These outsourcing statistics by year show the outsourcing revenue in the IT sector in 2018 was “just” $23.6 billion. In 2014, when the total revenue reached the highest point, BPO amounted to $76.1 billion, while ITO garnered $28.5 billion.

India is still the leader in global outsourcing.

For years now, India has been the industry’s leader, offering a large number of skilled English-speaking workers that no other country can provide at this low cost. According to outsourcing statistics from 2017, India is at the top with an index of 7.07, followed by China and Malaysia, which have 6.31 and 6.11, respectively. It’s worth mentioning that, when it comes to pure financial attractiveness - how affordable workers are in a specific country - Sri Lanka has the highest index number on the list with 3.42.

The outsourcing statistics presented in this research observe the three-year period from 2015 to 2017, which clearly demonstrates the fluctuations that happen year after year. Although 2017 saw an increase of 53%, 2016 saw quite a drop from 2015’s $43.5 million. That being said, the average contract value keeps rising steadily.

It is estimated that 300.000 positions are outsourced every year.

Rohan Bhansali provides the figure. According to various stats about outsourcing, he is the director of India’s largest digital agency. This number will certainly increase in the future, as more and more companies decide to explore the numerous benefits of outsourcing industry.

21 out of the top 25 offshore call center projects are located in the Philippines.

The Philippines are quickly becoming one of the most desirable outsourcing countries in the world. This shouldn’t be surprising, given that it is one of the largest English-speaking nations in the world, with a high literacy rate of 95%. What’s more, major multinational corporations are located there.

The value of Ukraine’s IT industry market might reach $5.7 billion by 2020.

IT outsourcing trends for 2019 have revealed that Ukraine could potentially challenge India’s dominance on the market. With more and more IT experts offering quality work at affordable rates, the world might turn its attention towards unjustly neglected countries in Eastern Europe.

Advantages and Flaws of Outsourcing

78% of respondents in Deloitte’s survey say they feel positive about their outsourcing relationship with other companies.

For the most part, businesses seem to be satisfied with their outsourcing deals because they help them reduce costs and shift focus to other important things. Stats on outsourcing tell us giants like India are becoming more and more professional each year, with a deeper and deeper talent pool.

65% of businesses that outsource application hosting say they will increase their outsourcing efforts in the future.

This says a lot about the popularity of the SaaS model, where an application is hosted by a third-party company that offers it for a subscription fee. This model is a lot more cost-efficient because it relies on cloud-computing and doesn’t take up the company’s resources, which is why it was one of the biggest IT outsourcing trends in 2019.

For 50% of employers, the quality of the service is one of the biggest drawbacks of outsourcing.

Half of employers feel the quality they’re getting from outsourcing workers isn’t that great. In addition to that, these employers have a lot of problems with workers not being proactive enough (able to foresee problems before they happen and act upon them).

59% of businesses use outsourcing to reduce their expenses.

On the other hand, outsourcing statistics show 57% of businesses use outsourcing in order to focus on their core business, while 47% use it to solve capacity issues. This is especially important for small companies and businesses, which simply lack space and capacity to support numerous other workers. In the IT and business sectors, the cost-cutting reason is number one for 87% of businesses.

89% of companies say they would never outsource strategic planning functions.

This is something companies consider an internal matter that outside workers can’t be trusted with. In the same manner, jobs outsourcing statistics show 80% of businesses are not too keen on the idea of outsourcing marketing and sales positions, either.

40% of help desk positions in the banking industry are outsourced.

Most of the time, help desk workers are outsourced because they don’t need to be in the office to do their jobs properly. That is why it’s no wonder that nearly half of banking help desk specialists are outsourced. What’s more, the outsourcing statistics graph shows over a third of jobs in payroll and benefits administration are outsourced for pretty much the same reason.

Companies that outsource payroll management save 18% more on average than companies that deal with it in-house.

Of course, this doesn’t include just payroll management but also workforce administration, health & welfare benefits, and time & attendance. In addition to that, companies which opt for a single vendor to outsource multiple functions can save up to 32% according to outsourcing statistics.

Outsourcing will see an increase in higher-level jobs in the future.

Although automation is one of the biggest trends in the world right now, with every fourth job being lost to it, there are some fields where outsourcing is simply a much better option. Considering the increasing quality of the outsourcing workforce, we can expect higher-level jobs to be outsourced in the future.

The average pay for an entry-level outsourced IT worker in China is $7,000.

That is why many outsourcing statistics 2018 show US companies in the IT sector prefer to use Chinese workers for these positions. In India, the leader in global outsourcing, this type of worker earns $8,400, so China is a lot more affordable. According to Balance, some Silicon Valley companies even offer temporary work visas as a form of payment.

Numerous industries use outsourcing to find outstanding talent overseas. The IT industry certainly leads the way with application hosting and software development services. Apart from that, outsourcing is also used in HR and payroll management, manufacturing, and various Government needs in the US.

What companies use outsourcing?

Some of the biggest companies in the world, including Apple, Nike, Cisco Systems, Wal-Mart, and IBM, use outsourcing to improve their efficiency and quality. Of course, this is not where the list of outsourcing companies ends. Thousands of other huge companies use foreign workers for their needs.

Why do companies outsource to other countries?

According to numerous outsourcing statistics, 59% of companies use it to cut costs. This way, they don’t have to invest in the workspace or equipment. What’s more, 57% of companies feel outsourcing lets them focus on their core business, and 47% use it to solve capacity problems.

Ivana is a staff writer at SmallBizGenius. Her interests during office hours include writing about small businesses, start-ups, and retail. When the weekend comes, you can find her hiking in nature, hanging off of a cliff or dancing salsa.